All Californians deserves a safe and affordable home

Celebrating victories from LA to the Bay

California’s housing affordability crisis has become one of the most pressing issues facing the state.  Many no- and low- income residents – the state’s most vulnerable individuals and families – are homeless or living in substandard, unsafe housing. And middle income working families – folks with traditionally good paying jobs and benefits – are feeling the pressure, too, spending more and more of their paychecks on rent, dramatically increasing their commute distance between work and home, and struggling to make ends meet month-to-month. 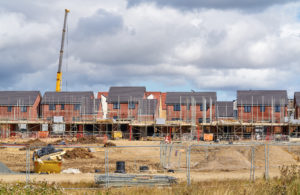 UFCW has joined forces with other union and community partners in addressing a crisis that is reaching catastrophe level in California.  We are working in coalition with labor, housing and homeless advocates, community organizations, faith groups, businesses, public health, and environmental organizations from LA to the Bay Area. In 2016 we celebrated several big victories and we’ll continue fighting for even more wins in 2017.

Passing Measure H was a big step toward making LA a more humane, compassionate and accepting community. On March 7, UFCW Locals 770 and 1442 helped win the support of LA’s voters for Measure H, the “Los Angeles County Plan to Prevent and Combat Homelessness.” In effect, the measure is designed to end homelessness for 45,000 people and prevent homelessness for another 30,000 individuals and families across LA County. And for some of LA’s most vulnerable populations – including women and children, veterans, seniors, foster youth and survivors of domestic violence – Measure H goes beyond just housing, it also provides the health/mental health treatment, job training and counseling these underserved populations need.

But we didn’t stop with Measure H. UFCW Local 770 joined the coalition efforts of unions and housing advocates committed to getting Measure JJJ, the “Build Better LA” Initiative, on the November 8 ballot. Together we gathered 100,000 signatures (while only 62,000 were required) for the ballot measure that would require real estate developers to build a minimum of 25% affordable housing when seeking zone changes or plan amendments while creating good jobs for local workers, including those overcoming challenging life circumstances, that meet training and wage requirements, creating a career pipeline for people who need it most. Build Better LA addresses LA’s housing shortage and the lack of jobs available to local residents that pay enough to keep up with the skyrocketing rents. Angelenos enthusiastically cast their votes again for the opportunity to build a kinder and more compassionate community response to the growing housing crisis. Build Better LA overwhelmingly passed with nearly 64% of the vote.

And after receiving two-thirds of the vote on November’s ballot, Measure A, one of the most ambitious affordable housing initiatives proposed in Santa Clara County, demonstrated what’s possible when labor, businesses, faith groups and other community organizations come together to address one of our most pressing issues. Measure A, supported by UFCW Local 5, will help fund the development of safe and affordable housing for the county’s most vulnerable populations including the homeless, veterans, disabled, seniors, foster youth, and others.

With wins in the primary and general elections, UFCW is more committed than ever to working with our brothers and sisters to help continue the push for affordable housing across the state.  The lack of affordable housing for working families has become the number one public policy issue in San Diego.  UFCW Local 135 is working with a variety of community and union partners, along with elected officials, to develop solutions to this crisis, and we will take a leadership role in any serious effort to make housing more affordable for our members and the community.

And at UFCW we’re expanding the fight for affordable housing to include not just residential but also vital community organizations.  We call it Placemaking and Local 64 has taken the first step in partnering with MEDA – the Mission Economic Development Agency – to help rehome the iconic Dance Mission Theater in San Francisco’s Mission District. Dance Mission, currently based at 24th and Mission, has been producing political art and supporting San Francisco’s vibrant and diverse dance community for more 40 years. After several steep rent increases, the organization can’t bear the next anticipated increase of $3,000. UFCW Local 648 is renovating a property it owns at 16th and Mission, Mission Dance will occupy two stories with theater and studio space.