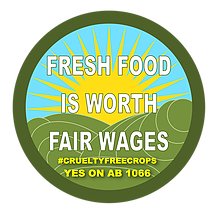 Many UFCW members get overtime after working more than 8 hours in a day or 40 hours in a week. This is required by state law. It is a benefit to the worker who puts more than is minimally required. But do you know over 400,000 workers in CA still don’t get overtime, including some members of UFCW? That is because they work in the multi-billion dollar agricultural industry and were exempt from overtime rules as a part of deal in the 1930’s so President Roosevelt could give millions of other workers the rights to organize. It is time for these workers to get what other workers have and that is to be paid overtime.

The fight for farm worker overtime is going down to the wire in the current legislative session, which will adjourn at the end of August. Assembly Bill 1066, that has been introduced by Assemblywoman Lorena Gonzalez, would have phased in overtime pay for farm workers. AB 1066 is a reasonable and fair proposal to phase in overtime pay for the farm laborers who are the foundation of billions in profits for California’s dominant agriculture industry.