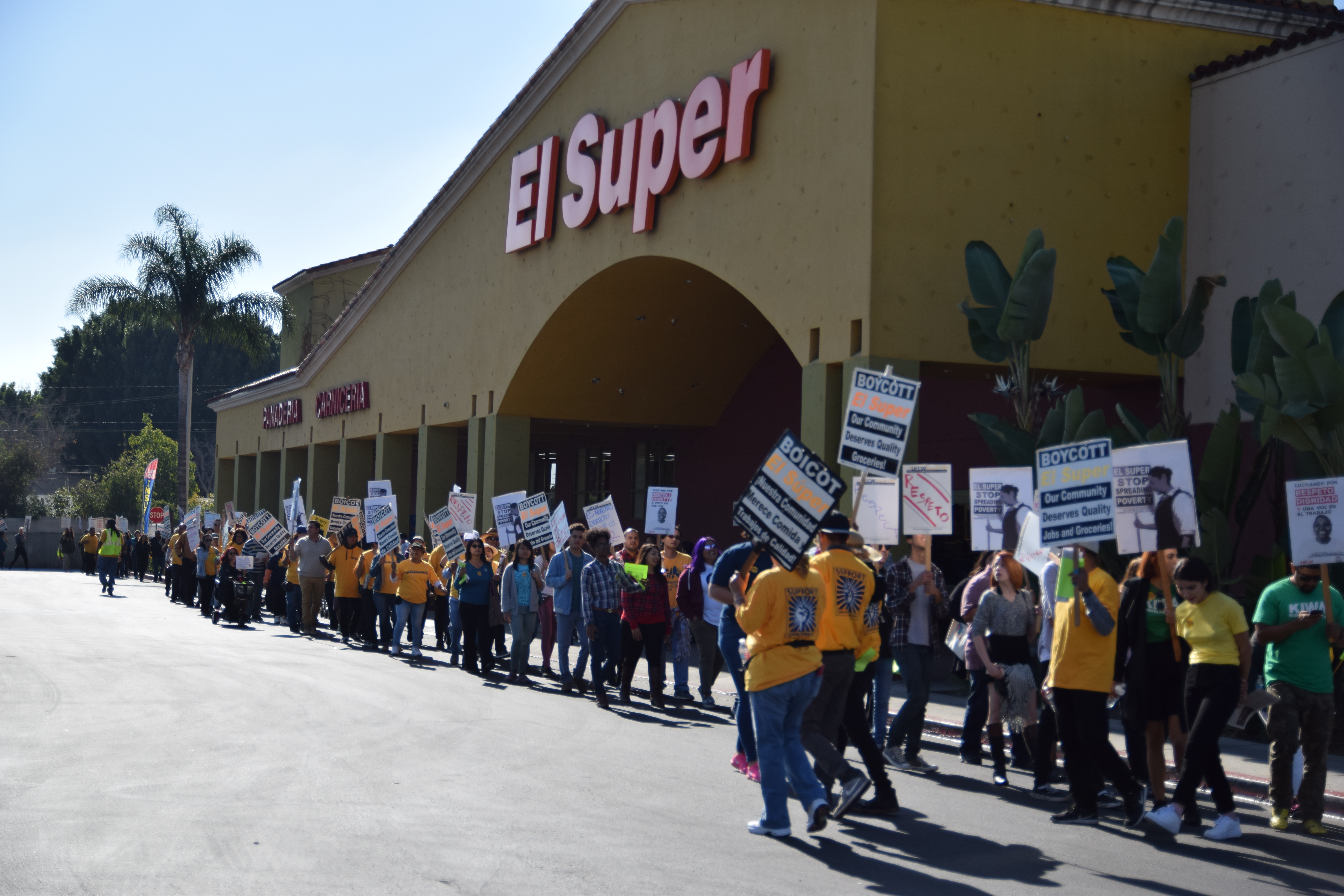 El Super UFCW members have been actively campaigning to win a new collective bargaining agreement with this multi-billion dollar, transnational corporation since their last agreement expired in September 2013. El Super has grown and succeeded on the backs of immigrant workers while catering specifically to Latino shoppers, but this company doesn’t respect any of them. El Super has waged an all-out campaign to break our union and deny our members the justice they deserve. But they have not succeeded.

The 2016 holiday season marked the two-year anniversary of the national El Super consumer boycott. Since the boycott was announced in December 2014, El Super has reported flat or negative “same store” sales in six of the previous eight reporting quarters. Before the boycott, El Super regularly reported positive, growing “same store” sales. With boycott lines established in front of 22 stores, on four of the busiest shopping days of the week, over 2.5 million consumers have been engaged and 270,000 El Super consumers have turned away and honored the union’s boycott request.

In November and December 2015, El Super workers staged strategically timed one-day strikes to protest the company’s Unfair Labor Practices. The ULP strikes, in combination with the ongoing boycott, resulted in a 0.9% decline in same store sales during the 2015 fourth quarter – the company’s worst financial performance since it began reporting its results in 2010.

The Justice for El Super Workers campaign achieved significant victories during the third quarter of 2016.

Second, the enduring impact of the ongoing El Super boycott resulted in yet another quarter of negative sales at El Super markets. Analysts had predicted a 2 percent increase in same stores sales, however the company reported a 0.4 percent sales decline last quarter.

The boycott’s impact was boosted by a public relations debacle for El Super during the month of August. First, a video captured by an El Super shopper of a rodent scampering across an El Super produce section was uploaded to YouTube and garnered over one million views. Print and television media outlets picked up on the incident and ran stories. Two weeks later, Los Angeles County health officials closed down an El Super store in South LA for 48 hours after they discovered mice droppings throughout the store. The store closure spurred another cycle of news coverage illuminating a hazardous vermin problem inside El Super stores.

During 2016, the Coalition for a Better El Super documented over 500 violations of environmental health regulations by El Super stores in Los Angeles, Orange and San Bernardino counties. Eighty-four of the violations were deemed “Major” or “Critical” by County health inspectors. The boycott lines distribute handbills alerting El Super shoppers to the ongoing threats to public health posed by El Super’s irresponsible management of its stores.

El Super workers have benefited greatly from the solidarity and support of many of the unions and organizations in the US, Mexico and Canada.

Thanks to the international solidarity from organizations like the Frente Auténtico del Trabajo (FAT), the Mexican Electrical Workers Union (SME) and the Project on Organizing, Development, Education and Research (PODER), we have been able to keep the pressure on El Super’s parent company in Mexico, but we still have a long way to go.

Regulatory Pressure on Chedraui in Mexico

The director of the Mexican Federal Commission for the Protection against Sanitary Risk, COFEPRIS, also confirmed his agency was also conducting an investigation into Chedraui’s operations.

Our mobilizations on both sides of the border continued throughout 2016.

First, in April, El Super workers were joined by over 1,000 supporters and marched from South Los Angeles to Huntington Park. The march coincided Chedraui’s annual meeting of its Board of Directors in Xalapa, Mexico.

In August, hundreds of trade union women from the Western US, Canada, and Mexico joined El Super workers at a protest outside its unionized, Inglewood, CA store.

Just prior to Thanksgiving, El Super workers were joined by legendary labor leader Dolores Huerta at a large protest outside Store 13 where Fermín Rodriguez works. Fermín Rodríguez is a union leader who was unlawfully fired by the company in 2015 and later reinstated after a federal judge granted a rare injunction against the company’s unlawful labor relations practices.

In December, El Super workers and their union staged a protest outside an El Super store in South Los Angeles. The protest was organized after UFCW obtained documents showing that El Super Vice-President Sal Marcianti made four donations to Donald Trump’s campaign for U.S. President. Trump’s incendiary anti-immigrant campaign rhetoric included statements alleging that Mexican immigrants are “rapists” who are bringing drugs and “lots of problems” to the US while promising to construct a one-thousand mile border wall between the US and Mexico.

As the Trump Administration assumes power in Washington, Latino workers like the El Super grocery workers need the solidarity and engaged support of organizations dedicated to defending immigrant workers’ rights. UFCW and El Super workers are committed to fighting together until justice has been served.