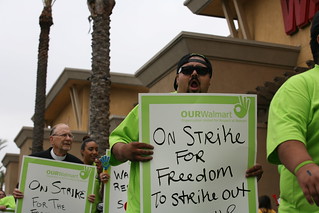 In February 2012, Walmart proposed a small format grocery store in Los Angeles’ Chinatown and obtained its building permits a month later. Low-road retailers such as Walmart, who want to enter into the City of Los Angeles, have actively resisted paying family supporting wages and benefits, and create the threat of displacement for small businesses and cultural/historic districts. UFCW Local 770, the Los Angeles Alliance for a New Economy, and a coalition of small business owners, residents, Asian-American organizations, and other groups mobilized to oppose the store, with an appeal against the building permits pending review.

Walmart plans to open a small-format grocery store in order to avoid the oversight that an existing L.A. City superstore ordinance requires. The law, passed in 2004, as the result of the mobilization by UFCW, LAANE and its coalition, enables the city to weigh numerous factors, such as job quality and business loss, in deciding whether to allow big box developments to proceed. L.A.’s superstore ordinance was enacted following Walmart’s failed attempt to open a superstore in the city of Inglewood. Despite spending more than $1 million on a ballot initiative to circumvent the public review process, Walmart was soundly defeated by a coalition of small businesses, clergy, community groups, and unions in 2004.

Quality grocery development should lift up both the physical and financial health of residents in food deserts and be incentivized. Angelenos should be able to decide the type of grocery stores in their neighborhood and have access to quality grocery stores and jobs in all of LA’s communities.

We believe that the grocery industry can help build a strong, healthy regional economy and a better city for all of us.