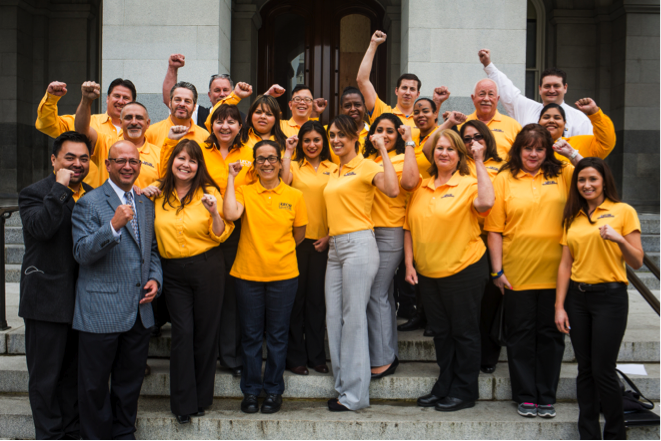 On Wednesday, February 24th., we will underscore both our strong support for legislation we are co-sponsoring and supporting in the current legislative session and express our appreciation to those state legislators who supported our signature legislation last year, AB 359 – The Grocery Worker Retention Act, signed by the Governor and effective in law as of January 1st of this year.

Will give workers greater security by ensuring that they have adequate notice of their work schedule.

Our economy has rapidly moved from a traditional employment model to one where many workers have little security and no guarantee of hours or income. Often workers must work multiple jobs just to make ends meet. At the same time, employers in retail and grocery have moved toward an “on demand” scheduling practice where workers are given little or no advance notice of their shifts and are expected to maintain 40 hours of availability regardless of how many hours they are eventually called into work.

Together these industry practices make a hard situation almost impossible. Part-time workers don’t have the ability to patch together multiple jobs if they never know what days they will be available. Parents cannot plan reliable childcare or have regular routines with their children. Studies have shown serious emotional and academic harm to children whose parents have unpredictable schedules. This is a women’s issue, a family issue, and a worker issue.

SB 878 offers a simple solution. Employers should post the monthly schedule at least one week in advance so that workers know when they will work, what their shifts will be, and how many hours they will have. Changes to that schedule should be made with at least one week of notice.

SB 878 is Co-sponsored by California Labor Federation, UFCW State Council and the Western Center of Law and Poverty

AB 67 – The Double Pay on the Holiday Act of 2016, authored by Assemblywoman Lorena Gonzalez and co-authored by Senator Ben Allen

AB 67 – will guarantee that employees make what is considered a living wage on days where they are inconveniently compelled to choose work over quality time with their families on Thanksgiving, which may ultimately help California’s fragile economic recovery because the workers that this bill aims to help immediately reinvest these earnings into the economy.

The commercialization of Thanksgiving is increasingly encroaching on time typically spent with family. In some cases, this work has become mandatory—which forces workers to choose between their family and their economic livelihood. This is an unfair choice, particularly because data shows that opening earlier doesn’t actually boost overall sales.

SB 878 and AB 67 are currently in the Senate and we will probably concentrate our advocacy efforts on Democrats in the Senate Chamber. As we have executed during past “Lobby Days” – we will blend teams to visit key Senators so that they and their staff hear our leaders and members’ stories from various regions of the state.

Your participation and collaboration is of enormous value to our collective success in the Capitol and with Governor Brown. Having an early presence in the Capitol from our Union leaders and members has real significance in advancing our legislative agenda.